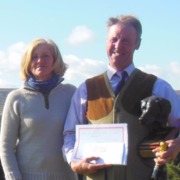 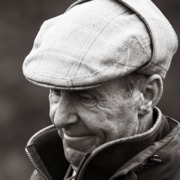 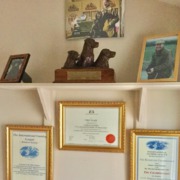 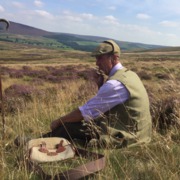 I have been involved with training & competing gundogs since 1986 and formed the name Brindlebay Gundogs in 1988. Since then I have bred 5 FTCHs, won over 100 field trials and made up 7 Field Trial Champions. The first being a black bitch FTCh Hamford Dixie of Brindlebay then followed by her daughter a yellow bitch FTCh Brindlebay Maize. Next came FTCh Bringwood Bobby of Brindlebay who of course won the much coveted I.G.L championship. Following Bobby's success I bred Brindlebay Jude who gained his FTCh status after winning six trials.

In 2007 my black bitch Mansengreen Bizzy of Brindlebay became a field trial champion, she won 9 trials in all. I then began to train her son who went on to become FTCh Brindlebay Butler one of the nicest dogs I have owned.

I am an A panel Kennel Club judge for retrievers judging in the UK and abroad, having now judged in 9 different countries including the prestigious Coup d'Europe, the Belgium retriever championship and the International Working Test 4 times. In 2004 I judged the CLA International Working Test at Blenhiem Palace. In 2008 I was a member of the winning team in the UK Euro Challenge Working Test held at Blenheim Palace running my black dog FTCh Brindlebay Butler. Sara Gadd and I run a joint kennel in Suffolk.

In 2011 I started to train my new field trial champion Garretthall Quill of Brindlebay she went on to win the Labrador Retriever club Novice stake in December 2012. This made her my new open dog for the next season. In October 2013 Quill won the Yorkshire Retriever 2 day open stake qualifying her for that years championship at Lauder in Scotland. In September 2014 Quill won the Forth and Clyde 2 day open stake gaining her title Field Trial Champion my 7th dog to gain that title. In December that year Quill won the South Western Golden Retriever clubs AV one day open stake which has given her a B qualification for 2015 IGL Retriever Championship. Quill is now expecting her first litter due to be born in April 2015 to FTCH Waysgreen Apollo, my plan is to keep two dogs and one bitch from the litter.

In 2015 I had the great honour to judge the IGL retriever championship at the Queensberry Estate (Drumlanrig ) Dumfries and Galloway. I also qualified FTCH Garrethall Quill of Brindlebay for the third time but was unable to run due to the judging appointment.....this year (2016 ) I have qualified again by winning the Yorkshire Field trial society two day open at Rosedale ...four consecutive years of qualification I am also running Birdsgreen Taggart who I qualified out of novice in September 2015 ...so far gaining a 2nd in a two day qualifier giving Tag a B qualification for the championship...he has also been awarded a guns choice at the lab club all aged ...so still very busy.

2016/17 season went pretty well for me ....Quill won the Yorkshire Retriever society 2 day open at Rosedale qualifying her for the IGL championship for the 4th consecutive year.

We also had the great honour to be asked to join the England team to run in an invitation trial at the Windsor estate to celebrate the Queen's 90th birthday. Birdsgreen Taggart of Brindlebay also ran very well gaining several 2day awards just missing qualifying for the championship by one place .....he is a very dependable dog with great game finding abilities.

The 2017 season has been very busy; Brindlebay Brigands won the Suffolk Gundog Club Novice Field Trial in September and

Both Sara and I have been very prolific this year judging here and abroad. In the Spring time we went to Italy to judge a two day working Test. This was held in a lovely part of the country with fabulous weather. In the Summertime we judged the International Working Test in Finland

which was held in glorious weather and teams from several different countries including Russia;

December I was Honoured to be one of the Judges at the Irish Retriever Championship ' this Trial was fabulous with some outstanding work.

Watch this space for progress.

Films 1 to 9, the completion of the series 'Life of a Gundog', are now all available.
Of the four Puppies featured in this series (Brindlebay Brigands, Boconnoc,Towie and Filleigh) two are now Field Trial Winners, Brindlebay Brigands and Brindlebay Towie. Brindlebay Boconnoc has won two Working Tests.

These training DVDS can be bought by contacting myself or Sara at saraandmike@btinternet.com